I stood with my good friend Ted on a narrow balcony overlooking an auditorium of 300 Kenyan pastors and mission leaders watching the final scenes of our new missions movie unfold. Ted stood through the whole two-hour showing, and the crowd below were equally riveted it seemed. They were motionless, but not silent—reacting at appropriate moments of humor or plot turn with laughter or a gasp. As the crowd watched the film, and Ted watched the crowd, I watched Ted. Like him, I was rejoicing in the completion of this massive project and in the wonderful reception from the Kenyan church. But I was also rejoicing in Ted just being there. He had flown out especially for the occasion.

Some seven years ago, Ted and I sat at my dining room table here in Nairobi and considered a crazy idea. Two pilots with a knack for telling stories, we wondered if our mission agency would ever back the creation of a small, field-based media ministry to tell some of the stories of God at work in Africa. And we wondered what God could do with such a thing.

On Field Media was born. At different times, and in different ways, God brought both Ted and I to the place where we were able to walk away from our flying and into the creative space of the OFM office. We were soon joined by Andy, a younger, hipper, new missionary who brought a whole new level of creativity to our small team, along with an adventurous bent that would inevitably push us to try harder things.

Through one project after another, OFM ventured off the path of the easy documentary, into the unknown and previously untried: to the Docu-drama (whatever that is), and then the flat out short-form drama. Stirring narratives. Cinematic visuals. Motion effects. We constantly pushed ourselves to become better storytellers. And with our mix of personalities, we somehow managed to find a sweet spot between staying too comfortable and recklessly overreaching. 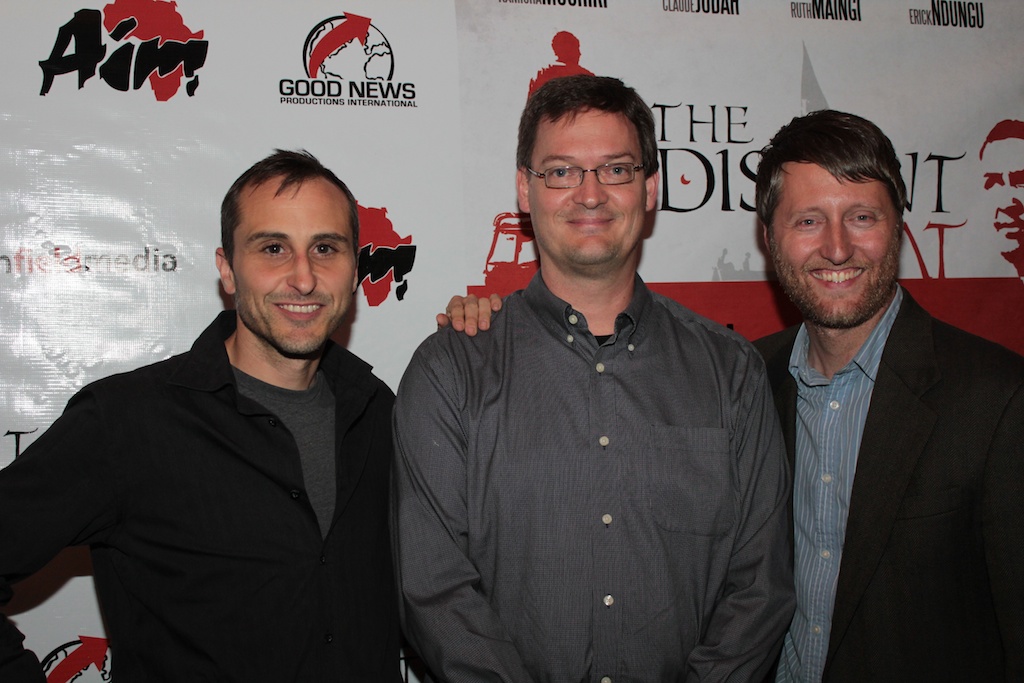 Mike, Ted, and Andy at the premiere for the film

And so it was that one day Ted stood before the team—by then six members strong—and said: “Guys, I think we need to make a movie.” If I recall the moment correctly, Andy cheered while I simply smiled in mild disbelief. I had some reservations, doubts even, but it was obvious to us all that God was behind it.

The process was much more daunting than one would gather from the fun-loving “behind the scenes” videos we posted. It stretched our team’s capacity, our budget, our balance of work and family, and even our relationships at times. But it also stretched our faith.

In the end, Ted would have this to say about the film, which he and his family previewed from afar after moving back the USA just months before OFM finished the project:

One late afternoon in the middle of production, as Ted and I were unloading equipment from the van, he turned to me and said, “Mike, what if this movie is the most important thing we do in Africa?” I paused, C-stands in my hands, and considered it. Between us, Ted and I had logged thousands of flying hours on the continent: Many missions accomplished. Missionaries served. Lives saved even. But what if this film, with its aim to awaken the African church to get serious about sending missionaries, was more lasting than all that? We may never know, but Ted could be right. He was certainly right when he said, “God made this movie.”

It took nearly two years to complete. Two years. 223 cast, crew, and extras. 47 production days. 82 hours of footage. 10 months of post-production. 54 minutes of original music (scored by Andy). And one thousand guests to celebrate with us over the course of several Premiers and this special event at the church where 300 pastors and mission leaders now clamored for a copy of the DVD.

A year ago I wrote this in the midst of production:

A movie begins and ends with a story, but everything in between is a blur. It is as if the written script, once whole and coherent, explodes into a million pieces… At some point all of those pieces will come together again, coalesce into a whole story, and be ready to share. (Read: The Making of a Story)

Well, that time had finally come.

As did the time for Ted to get back on a plane for Minnesota.

I stood with my good friend Ted at the curbside of the departures terminal at Jomo Kenyatta airport as the Nairobi night weighed heavily, declaring an end to more than just the day. We reluctantly unloaded his bags from my Subaru, placed them on a cart, and embraced the inevitable: Another goodbye. Then we embraced each other and Ted walked away. I watched as he cleared through the security checkpoint for the flight home, sad for the moment but thankful for our friendship—and the many unforeseen adventures it took us on.

The journey of The Distant Boat is not over. It will probably have years of life and impact throughout Africa—that is certainly our hope. But that journey began, I think, at my humble dining room table those seven years ago, when two friends ventured to ask “what if?”

Want to see the film? There’s info on how to get it here